Immediate Need
We are here to help you. If you have need of our services, please call us, day or night, at:
215-467-3838
To better prepare yourself, we have provided you with some helpful information regarding the immediate need process.

To share your memory on the wall of Donald Teufel, sign in using one of the following options:

Donald was an Electrician by trade and enjoyed his work. His co-workers fondly called him "Indiana Teufel" because it was always an adventure to work with him. Rooting for and following the Philadelphia Eagles was his favorite pastime. A 700 Level Eagles Fan! After a traumatic brain injury, he started bike riding as a way to rehab. He always had a love for biking, and after his accident, he was able to continue his love of biking while building on his strength. He even went to the extreme during his bike riding escapades, often bringing himself to high heights and riding on I95. He often referred to himself as DDT "Dynamite Donald Teufel". He will be greatly missed by his family and friends.

His Funeral will be Private.

To send flowers to the family or plant a tree in memory of Donald Teufel, please visit our Heartfelt Sympathies Store.

There are no events scheduled. You can still show your support by sending flowers directly to the family, or planting a memorial tree in memory of Donald Teufel.
Visit the Heartfelt Sympathies Store

We encourage you to share your most beloved memories of Donald here, so that the family and other loved ones can always see it. You can upload cherished photographs, or share your favorite stories, and can even comment on those shared by others.

Posted Dec 03, 2020 at 04:00pm
one of the super "good guys" has left us--he was the most gentle and caring person anyone could hope to encounter--he was all about taking care of his family, his friends, especially from his childhood, living his faith, his beloved eagles, enjoying the jersey shore, and the worse negative, if he was frustrated, you would ever hear from his mouth was "PHOOEY"--he has had a really hard road to travel these past few years that most of us could not begin to endure--we will always remember him best before all health issues reared its ugly head--rest in peace dear brother-in-law--marie and al
Comment Share
Share via:
BP

Posted Nov 30, 2020 at 09:38pm
Sending my condolences to you all during this difficult time! Please let me know if there is anything I can do! Sending big hugs !!! Brittany pooler xoxoxo 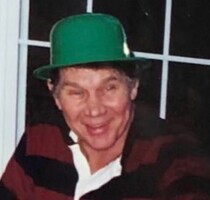